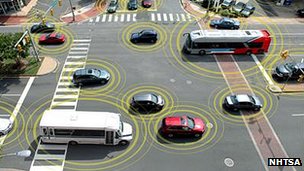 On the roads of Ann Arbor, Michigan, hundreds of vehicles are fitted with kit that lets them ‘talk’ to each other. The pilot was initiated by the US Department of Transport and will continue for one year and will connect about 3,000 vehicles in total.

The aim of the pilot is to test technology designed to alert drivers to dangerous situations in an effort to reduce the number of accidents on the roads. At the end of the trial, the data gathered should be used to force law changes regarding the required safety equipment.

In 2011, more than 32,000 people died on the US’s roads due to crashes. The government suggests that 80% of the number of accidents did not involve drugs or alcohol meaning that technology could create a step-change towards safer transport.

The companies Ford, General Motors, Honda, Hyundai, Mercedes-Benz, Nissan, Toyota and Volkswagen have all provided vehicles to be used. Nearly 500 trucks and buses are already equipped with the communication devices which rely on technology similar to wi-fi. By the start of October that number is set to rise to about 2,800.

The actual kit will let vehicles send data to each other and selected parts of the city’s infrastructure.

Drivers will be warned if:

Drivers will be warned of dangers they might not be able to see to reduce the risk of a collision.

According to National Highway Traffic Safety Administration’s David Strickland, this technology has the potential to be the ultimate game-changer in roadway safety. However, it still remains a challenge to implement the technology in the real world, he said. 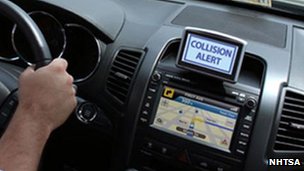 Alternatives to the technologies involved in the project are already on the market. For example, Bosch offers an ultrasonic sensor which registers objects three metres to a car’s side which the driver may not be able to see. Nissan has also introduced a car-mounted radar which monitors the road ahead and applies the brakes if it thinks a collision is imminent. In Europe Volvo is working on an alternative wireless technology in which cars “follow” a lead vehicle, mimicking its actions and forming a convoy.

Even though these technologies have great potential to improve road safety, the amount of time it will take before we see it become widespread will depend on both whether the technology is viable and how quickly governments are likely to demand that vehicles implement it. At least 30 to 40 years away we would say.